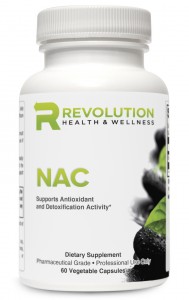 N-acetyl-cysteine NAC, a sulfur-containing derivative of the amino acid L-cysteine, supports antioxidant and detoxification mechanisms in the body.

NAC supports antioxidant activity by neutralizing hydrogen peroxide, hypochlorous acid, and the highly reactive hydroxyl radical and also serves as a source of sulfhydryl groups. In addition, NAC enhances production of the tripeptide glutathione—a key component of both antioxidant and detoxification enzymes.*1

NAC is recognized for its support of normal mucous production and may positively support respiratory function and eye health, especially when consumed over a prolonged period.1-3

Research suggests that NAC may protect cell and tissue health by supporting normal metal status in the body.*1,4,5

While the absorption of oral glutathione may be limited,6 supplementation with NAC may significantly increase circulating levels of glutathione in the body.7,8

Through the activity of these enzymes, glutathione directly supports antioxidant activity, phase II detoxification, and the normal breakdown of metabolites, toxins, and other compounds in the body.

A variety of factors may determine glutathione requirements, including level of exposure to toxins, increased phase I detoxification activity, and overall need for antioxidant support.

Maintaining glutathione levels may be important to maintaining the health of the respiratory, hepatic, and immune systems, as well as supporting antioxidant protection of lipids and proteins and supporting the normal response to inflammation.7-13

Levels of endogenous antioxidants, including glutathione, may decrease with age.14 It is important to maintain adequate levels of glutathione in the body to support overall health and well-being throughout the lifespan.*

Serves as a reservoir for Nitric Oxide. NO + Cysteine (thiol) makes RSNO. The RSNO is a storage form of nitric oxide. The RSNO has a much longer half-life than NO.

Vitamin B6 helps increase cysteine synthesisCysteine may exert its antihypertensive effects directly or through its storage form, glutathione, by decreasing oxidative stress, improving insulin resistance and glucose metabolism, lowering advanced glycation end products, and modulating levels of nitric oxide and other vasoactive molecules. Therefore, adopting a balanced diet containing cysteine-rich proteins may be a beneficial lifestyle choice for individuals with hypertension. An example of such a diet is the DASH diet, which is low in salt and saturated fat; includes whole grains, poultry, fish and nuts; and is rich in vegetables, fruits and low-fat dairy products.16

A variety of lifestyle factors have been shown to directly influence blood pressure levels at both an individual and population level. Of these, the most important are excess body fat, alcohol consumption, physical activity, and a variety of dietary constituents including salt, potassium, and a complex of fruits, vegetables, and saturated fat as well as n3 fatty acids. Moderate changes in combinations of some of these factors have additive effects on blood pressure reduction in all grades of hypertension. Effects are often as large as those seen with antihypertensive drug therapy, but with a greater potential to simultaneously reduce the risk of cardiovascular disease by mechanisms other than blood pressure reduction. The role of stress in long-term blood pressure elevation remains enigmatic other than through possible influences of unhealthy coping mechanisms that determine dietary, drinking, exercise, and smoking habits. Lifestyle changes have a major role to play in the prevention and management of high blood pressure and associated cardiovascular disease and in the reduction of requirements for antihypertensive drug therapy. Cook et al,85 using data from observational studies and randomized controlled trials, estimated that reducing the average diastolic pressure in a population by as little as 2 mm Hg through lifestyle changes would decrease the prevalence of hypertension by 17%, with a 6% reduction in the risk of coronary heart disease and a 15% reduction in the risk of stroke and transient ischemic attacks. Improved methods of achieving changes towards a healthier lifestyle remain a high medical and social priority. 17

Four weeks of oral NAC treatment significantly decreased plasma tHcy concentrations, irrespective of lipid or smoking status, and lowered systolic blood pressure in both normolipidemic and hyperlipidemic men, with significant diastolic blood pressure reductions in the HYL group only. Increased oral intake of cysteine may therefore be considered for primary or secondary prevention of vascular events with regard to the 2 independent risk factors of hyperhomocysteinemia and arterial hypertension.18 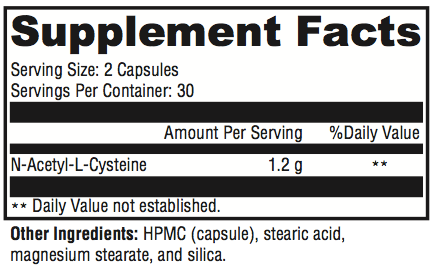