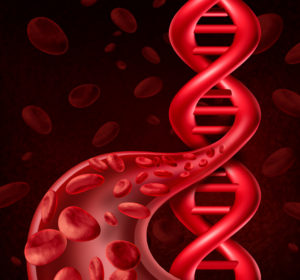 Cardiovascular disease is the #1 killer of men and women in the US and in the world. Our Tulsa Functional Medicine clinic focuses on identifying the underlying cause for illness and disease as well as your individual risk for future problems.

Not only does it help us identify a potential problem, it also helps us understand how to optimally treat it.

A 44 year old black male with a history of hypertension for 20 years. He is on 4 medications (amlodipine 5mg, ramipril 10mg, indapamide 1.25mg, and metoprolol 100mg) and his blood pressure is STILL 168/102 and he has some lower extremity edema.

His labs showed a high urine aldosterone and potassium. His plasma renin activity (PRA) was low at 0.42. His endothelial function test (Endopat) was low at 1.52. His CardiaX genetics showed that he was CYP4A11 homozygote abnormal.

He was started on Amiloride 10mg per day. This is an older medication that is just not used much anymore at all.

In 8 weeks he was only taking Amiloride 10mg and amlodipine 5mg per day. He had no edema and his endothelial function (Endopat) was 1.95 (near normal). Oh, and his blood pressure was 122/84!

This is a real case and underscores how understanding your genetics and treating them appropriately can dramatically alter the course of the disease process. His CYP4A11 is a specific genetic alteration with specific implications. The ONLY medication that works in this case is amiloride.

Why you need a CardiaX Lab:

CardiaX is a genetics labs evaluating your genetics for 21 different Single Nucleotide Polymorphisms (SNPs). Each of these 21 SNPs were identified through research as both pertaining to cardiovascular disease or hypertension AND are modifiable. That doesn’t mean that we can change the gene itself but we CAN change the expression of the gene and reduce its impact.

It is an excellent test and EVERYONE should know their genetics and have this test read by a physician who understands the implications of these specific genes.

It is a once in a lifetime test – you’ll never have to do it again because your genetics will never change.

Who should get a CardiaX lab?

My first answer is that everyone should get it. However, more specifically, anyone who has the following concerns should get the CardiaX genetic evaluation:

MI & atherosclerosis. 33 gene enhancers located in 9P21 region that are implicated in inflammatory pathways. Interaction of 9p21 with STAT 1, CDKN2A/B and interferon gamma increase genetic susceptibility to CHD and response to inflammatory signaling in vascular cells. 100% increased risk of MI.

aka Phosphatase & Actin Regulator 1 (PHACTR1). Mostly expressed in the brain (globus pallidus). It is a protein which regulates the reorganization of the cytoskeleton. Associated with migraines and CAD. Induces by NRP and VEGF through NRP-1 and VEGF-R1 receptors. Thus, it is thought to play a role in cell motility and vascular morphogenesis.

Early identification, prevention and risk factor control is extremely important in the context of heart disease.

Excess sodium intake has been linked to hypertension in some individuals. This can increase risk for atrial fibrillation.

To reduce risk of stroke, limit intake of saturated and trans fats, and increase intake of monounsaturated fats from high-omega-3 source fish, such as salmon.

encodes for glutamine synthase, an enzyme that converts glutamate to glutamine. This SNP is significantly associated with CHD in diabetic patients (OR 1.36) but not in patients without diabetes (OR 0.99).

This C mutation has been associated with an increased effect in diabetics.

Diet changes should focus on an increase in fiber and reduced intake of refined sugar.

Spironolactone is considered the best treatment option in these patients (ACEI or ARB), especially in resistant hypertensive patients. Aldosterone breakthrough on ARB and ACEI may be more common with the TT allele.

TT variant results in highest aldosterone levels followed by CT, and then CC.

Low sodium, heart healthy diets such as DASH and Mediterranean and selective angiotensin receptor antagonists have been shown to help reduce hypertension.

Myocardial infarction, or heart attack, occurs due to inadequate blood flow or lack of oxygen which damages heart muscle. Avoiding smoking, reducing blood cholesterol and increasing physical activity can all help in maintaining good heart health. The DASH diet is recommend as it has been shown to reduce risk of heart attack

Myocardial infarction, or heart attack, occurs due to inadequate blood flow or lack of oxygen which damages heart muscle.

It damages your HDL and makes it dysfunctional and the LDL more atherogenic. It is an independent risk factor for CVD. The ratio of HDL/ApoC3 or VLDL/ApoC3 is a better CHD risk predictor than ApoA or ApoB. It antagonizes ApoE and inhibits clearance of TRL from the circulation. It increases TG and sdLDL. It inhibits Lipoprotein Lipase and clearance of LDL. It promotes vascular inflammation, stimulates NfKb, increases CAMs, activates monocytes and endothelial cells. High responder to endotoxin. Role in pancreatic B cell biology and DM1.

Reducing lipid levels (Total-C and LDL-C) are the goal for treatments of this condition.

Omega 3 supplementation has been shown to improve HDL. Whole food, plant based, high fiber diets have also been shown to reduce LDL-C.

Use of vitamin E and aspirin should be based on COMT polymorphisms.

Blood pressure is controlled by the renin-angiotensin system (RAS) which is directly affected by the ACE I/D polymorphism.

The DASH diet (Dietary Approaches to Stop Hypertension) is also recommended which has been shown to reduce heart attack risk by 18%.

APOE genotype contributes to the inter-individual variability observed in the metabolic response to an Omega-3 PUFA supplementation, especially serum lipids and glucose.

N3 PUFA supplementation was associated with a decrease of plasma triglyceride levels (p = 0.0002) as well as with an increase of fasting glucose (FG) levels but within normal levels(p = 0.02) in all phenotypes

Total-C, LDL-C, and Apo-B levels were higher in subjects carrying the APOE4 allele, intermediate in homozygotes for the APOE3 allele, and lower in carriers of the APOE2 allele.

Methylation supplementation is recommended for individuals who carry the mutations of the MTHFR genes.

Mutations in the MTHFR gene lead to accumulation of homocysteine in the body which increases risk for cardiovascular disease.

The most important nutrients that help lower homocysteine levels are folate, vitamins B12, B6 and B2, zinc and trimethylglycine (TMG).

Caffeine is exclusively metabolized by CYP1A2 to paraxanthine, theobromine and theophylline.

Avoid caffeine if you are a slow metabolizer.

Dietary changes such as DASH diet or Mediterranean diet are recommended for heart health and normal blood pressure.

Variant of SCARB1 changes a hepatic receptor protein from glycine to serine. Increased blood levels of HDL due to inability of HDL to attach to hepatic receptor for break down, disposal and recirculation. The HDL is not protective (dysfunctional). Increased risk of CHD by 49% in black males and 24% higher in white males.

Eating fish high in omega 3 fatty acids have shown to decrease triglycerides and LDL cholesterol, as well as improve blood vessel elasticity, which reduces the risk for blood clots.

Oils with a higher polyunsaturated fat content, such as avocado, olive or safflower, contain more omega-6 fatty acids have been shown to reduce LDL cholesterol levels

The 3 mutations in NOS3 gene lead to decreased production of Nitrous oxide or impede its travel to the cell membrane. Nitric oxide precursors can be used as supplements to compensate for these mutations.

Plant foods, particularly beets and leafy greens like kale, Swiss chard, arugula, and spinach, are rich in dietary nitrates and nitrites—compounds that stimulate the production of Nitrous oxide in the body.

B2 adrenergic receptor. DASH diet increases PRA & Aldosterone levels in response to decreases in BP which can counteract the BP lowering effect of the diet. Adding an ACEi, ARB, or DRI improves BP response to the DASH diet in GG genotype due to the reflex increase in PRA.

Dietary interventions such as DASH diet or Mediterranean diet are recommended for reducing blood pressure.

A whole foods plant based diet is high in dietary fiber which can help reduce blood pressure.

a serine protease that is the key enzyme in the biosynthesis of ANP and BNP which regulate salt and water balance, intravascular volume, and blood pressure. Corin is reduced in patients with CHF. The SNP is more common in blacks and may account for the increase in salt sensitive HTN & CVD.

Maintaining a healthy weight is important to avoid hypertension and other heart conditions.

Reducing sodium intake and increasing potassium intake from vegetables has been shown to reduce blood pressure.

Polymorphisms in glutathione peroxidase have been shown to increase the risk of cardiovascular disease due to decreased GSH-Px enzyme activity.

Supplementation of selenium and glutathione is recommended.

Food and specific nutrients as listed in the supplementary form can also be considered to reduce hypertension, CHD and MI risk.

Polymorphism in this gene is associated with Dyslipidemia due to impaired reverse cholestrol transport.

Reduced intake of high saturated and trans fat foods increases HDL-C and reduces LDL-C. A whole foods plant based diet, low in unhealthy fats, may help improve lipid levels. Exercise >150 minutes per week, may increase HDL levels. Higher HDL levels help remove bad cholesterol from the body. Emphasize nuts, fish and other foods containing omega-3 fatty acids to improve the ratio of LDL cholesterol to HDL cholesterol. Moderate use of alcohol has been linked with higher levels of HDL in some individuals.

Emphasize nuts, fish and other foods containing omega-3 fatty acids to improve the ratio of LDL cholesterol to HDL cholesterol.

Moderate use of alcohol has been linked with higher levels of HDL in some individuals.

One of the CYP450 enzymes. Hydroxylates MCFAa such as laurate and myristate. Metabolizes AA to 20-hydroxyeicosatetraenoic acid (20-HETE) by an Omega oxidation Rxn. 20-HETE regulates blood flow, vascularization, BP, and kidney tubule absorption of ions in rodents and possibly humans.

Amiloride is used with other diuretics as listed in the supplementary form to treat hypertension, heart failure, or extra fluid in the body (edema).

ACE inhibitors and angiotensin receptor inhibitors can be used to reduce high blood pressure and risk for heart failure.