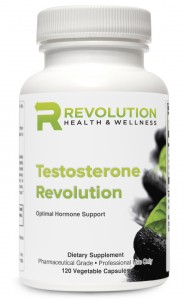 This conversion is likely inhibited by the rich content of apigenins which are among the 28 kinds of flavonoids present in the Green oats (Swiss Oats A111TM).[2] Traditionally used for prostate health, nettle may have some association with sex hormone binding globulin and aromatase.[3] Sea buckthorn contains lignans. Lignans block aromatase and 5- alpha reductase, sparing testosterone.[4] Oats, nettle and buckthorn are known to contain neurotransmitters that improve mood.[2]

Lower levels of this hormone have been associated with a decline in libido, weaker erections and/or a decreased ability to become erect, lack of energy, less strength &/or endurance, loss of height, decreased enjoyment in life, being sad or grumpy, less ability to play sports, falling asleep after dinner or decreased work performance.[5] Five percent of males aged 40-50 years and perhaps as many as 70% of men over 70 years are confronted by these problems known clinically as “hypogonadism” and also referred to as “Andropause.”[6,7,8]

The majority of testosterone (approximately 60%) is bound to sex hormone binding globulin. Of that considered bioavailable and the best indicator of male androgen status, approximately 38% is weakly bound to albumin and the remaining approximate two percent is known as “free” testosterone.

Against a background of earlier studies with Swiss Oats A111 that showed significant increases in free testosterone levels and significant improvement in andropausal symptoms,[9,10] Revolution Health & Wellness Clinic, in partnership with Aeron Life Cycles Clinical Laboratory® confirmed the efficacy of Testosterone Revolution in a small study. The ADAM screening questionnaire (Androgen Deficiency in the Aging Male) was administered for a baseline assessment of symptoms and repeated after one month.[11] Saliva bioavailable testosterone was measured before and after supplementation by the Aeron SBA-T Assay.[12] Extensive circadian testing was used to confirm a 24-hour pattern of reduced testosterone output before supplementation, followed by an increase in bioavailable testosterone after two weeks of uninterrupted supplementation with Testosterone Revolution. Measurement of salivary testosterone after further supplementation confirmed increased levels in those men who had low levels prior to using the formula. Follow-up ADAM tests scores demonstrated symptomatic improvements.[13] 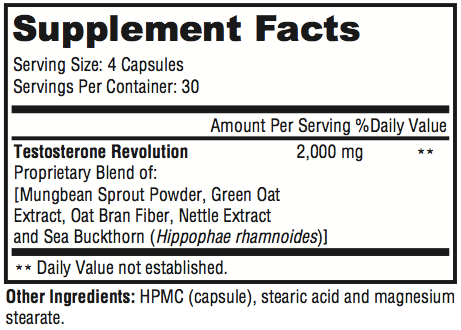 Take 4 capsule with 8 oz of water once a day, upon waking