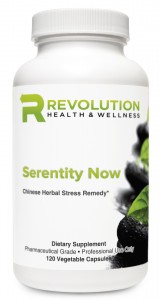 Schisandra Fruit (Schisandre chinesis) is used as an adaptogen for increasing energy and resistance to stress and disease. It normalizes blood pressure and blood glucose levels and stimulates the immune system. In Traditional Chinese Medicine (TCM) specifically, Schisandra is used for physical exhaustion, depression, irritability and memory loss. Its lignan content may be antidepressant, anti-fatigue and tranquilizing.*[5]

Jujube (Zizyphus spinosa) is used in Chinese medicine for lack of appetite, fatigue, hysteria, hypertension and as a sedative. Jujube has also been used against stress ulcers.*[6]

Don Quai Root (Angelica sinesis) is used in TCM to strengthen the heart, spleen, liver and kidneys. Dong quai has a mild sedative effect that can relieve stress and calm nerves.*

Ophiopogon Root (Ophiopogon japonicus) is known as Mai Men Dong in TCM. Its main function is as a tonic for yin deficiency. This herb, often combined with others is used to address insomnia, restlessness, irritability, hypertension, palpitations, thirst, dry mouth, fatigue and inhibits pathogens.*[8]

Panax Ginseng (white) is used as a general tonic to strengthen the body and restore vitality. It is used in the presence of stress-related symptoms such as: loss of appetite, nausea, listlessness, forgetfulness, dizziness, headache, insomnia. Ginseng stimulates the pituitary to secrete ACTH that in turn stimulates the adrenal activity. Ginseng also appears to enhance the immune system.*[9,10]

Chinese Salvia Root (Salvia miltiorrhiza) also known as Chinese sage or red sage root is used to support the liver and as a heart tonic that improves circulation. It may have antioxidant and anti-inflammatory properties.[11] Stress can cause bone loss. Tanshinone IIA, a substance in Salvia miltiorrhiza “has the potential to ameliorate boneresorption diseases in vivo by reducing both the number and activity of osteoclasts”.*[12]

Poria Fungus (Poria wol fiporia), a mushroom, is an attractive ingredient for a stress formula because it is known to reduce anxiety, restlessness, fatigue, tension, nervousness and insomnia.*[13]

Platycodon Root (Platycodon grandiflorum), is an ancient Chinese herb associated with reduced sensitivity for allergic reactions and reduced capillary permeability. It is used to treat diarrhea and edema, has analgesic and sedative effects and is beneficial for the treatment of stomach and duodenal ulcers.*[14]

Acorus Rhizome (Acorus gramineus), or Japanese Sweet Flag has been used in Asia for more than 2000 years to lessen swelling and constipation. One of its components has a neuroprotective effect.*[15] 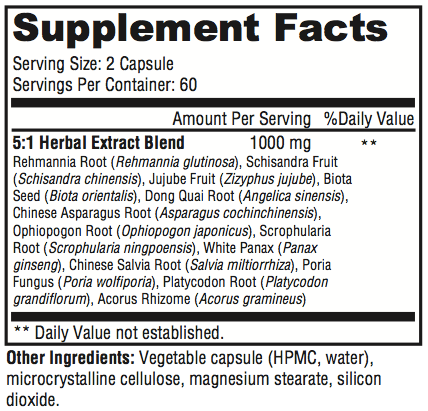 Take 2 capsules twice daily. This can be increased to 2 capsules 3 times daily if needed.