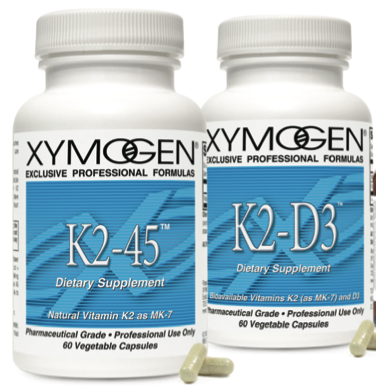 There are three forms of dietary supplement vitamin K:

The differences between MK-4 and MK-7 are striking.

Although both forms are completely absorbed and peak in the serum at about two hours, the MK-7 stays there approximately nine times as long as the MK-4 (eight hours v. 72 hours), offering the benefit of single daily dosing.

In a study using a 60 mcg dose of each form, in only eight days, six times more MK-7 had accumulated in the serum compared to MK-4.

The naturally-occurring fat-soluble vitamin K, discovered in 1929 and named from “Koagulation vitamin”, is found either in the form of K1 (phylloquinone), derived from food sources such as soybeans and green leafy vegetables, or K2 (menaquinone) of bacterial origin.

Structural differences between these two natural forms impact the bioavailability and bioactivity.

Whereas vitamin K1 has a short serum half-life with only 10-20% of the vitamin K1 absorbed from food even reaching circulation, the long side-chain of vitamin K2, allows it to bind with other fat particles in circulation enhancing its half-life and ability to reach peripheral tissue.

Although both forms reach the liver, most of the K1 is used at this site to secure coagulation, with little left over to support the body’s needs elsewhere. K2 is also transported to extra-hepatic soft tissue, bones, and arteries.

Healthy flora in the bile-deficient lower intestines manufacture vitamin K2, but intestinal absorption is insufficient to meet the needs of bones and arteries.

Food sources alone may not be sufficient supplementation.

For example, to obtain the 45 mcg of K2 that a single capsule of K2-45 supplies, one would have to consume nearly nine pounds of meat or more than a gallon of milk.

Fermented cheeses are rich sources of K2, however, not everyone consumes these quantities daily; hence, the potential need for a dietary supplement.

Outside the liver, vitamin K is needed for calcium utilization. It activates osteocalcin, the protein needed to bind calcium to the mineral matrix in bone. The vitamin may decrease bone resorption by reducing the synthesis of prostaglandin E2 or Interleukin 6 by osteoclasts.

Vitamin K lowers the risk of cardiovascular-related damage by participating in the carboxylation of the most potent inhibitor of arterial calcification known, Matrix GLA Protein (MGP). Researchers have demonstrated that supplementation with vitamin K2 reduces arterial/aortic calcification.

Vitamin K has specific receptor binding sites that allow it to regulate gene activity. Besides the gene-mediated effects upon critical proteins, the vitamin can bind with the steroid and xenobiotic receptor, influencing its expression.

Vitamin K is a potent antioxidant, is anti-inflammatory, and participates in the induction of apoptosis.  Vitamin K and vitamin D share some similar characteristics and are believed to act synergistically.

The ratio between carboxylated and uncarboxylated osteocalcin can be used as a determinant for vitamin K status.

Some patients need much higher amounts 100-200mcg per day are required for cardiovascular disease issues. If you are trying to prevent restenosis of a coronary artery stent we recommend at least 200mcg per day.