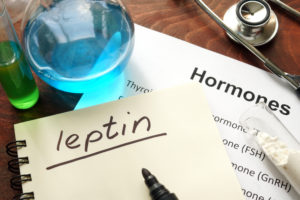 Leptin was discovered in 1994 when Friedman and colleagues performed positional cloning of the ob  gene, responsible for a recessive mutation found decades earlier to cause obesity in the homozygous ob /ob  mouse.1 The researchers discovered that this gene encodes a secreted peptide hormone, expressed almost exclusively in adipose tissue, which they named “leptin.”

Identification of the human leptin gene (OB  or LEP ) in 1995 opened the possibility of using leptin to treat human obesity, insulin resistance, and diabetes.7  This possibility was confirmed in part with the discovery of individuals with recessive loss-of-function mutations in the human leptin gene. These mutations are extremely rare, with only a handful of affected families discovered worldwide in the past decade.8  Analogous to the ob/ob  mice, a leptin deficient individual has no detectable circulating leptin and is obese, hyperphagic, and severely insulin-resistant from early childhood. Treatment with recombinant human leptin reverses all of these defects and normalizes metabolism in these individuals in a matter of weeks.9

Despite these examples of beneficial effects of leptin treatment, studies with purified recombinant human leptin in common types of obesity were disappointing: most individuals with obesity exhibit little or no change in weight with leptin treatment.14,15  Why is this?

When there is sufficient access to food and body fat stores are ample, feeding behavior and metabolism should be adjusted to decrease energy intake (enhance the sense of satiety) and endogenous glucose production, while simultaneously increasing energy expenditure and mobilizing fat stores.18

On the other hand, if the brain has decreased signal input from these “adiposity signals” then the brain adjusts metabolism to increase nutrients in the blood stream. In part, this is accomplished by increasing glucose production (gluconeogenesis) in the liver.19  With the consequent rise in body fat content and blood glucose levels, blood levels of leptin, insulin, and free fatty acids also increase, providing negative feedback to the brain and restoring food intake and glucose production to their former values.15

Leptin production is directly coupled to fat mass, obese people generally exhibit unusually high circulating levels of leptin that are sustained over many years. This chronic elevation of leptin in obesity, along with hyperinsulinemia and other metabolic derangements, are believed to produce a state of “leptin resistance” in the hypothalamus.16  In effect, the primary pathway through which leptin controls appetite and metabolism becomes inherently flawed at some point in obese individuals, such that the brain does not adequately receive or relay the signal to decrease food intake and increase energy expenditure.

The risk ranges for the Leptin:BMI ratio are:

While absolute leptin deficiency causes obesity, most obese individuals exhibit elevated circulating plasma leptin levels—as would be expected, given that leptin is synthesized and secreted by adipocytes in direct proportion to total body fat mass.16

Sustained elevations in plasma leptin levels are associated with obesity, overeating, and inflammation-related diseases including hypertension, metabolic syndrome, and cardiovascular disease (CVD).24 It is thought that increases in leptin level (in response to caloric intake) act as an acute response mechanism to prevent excess cellular stress caused by over-eating when adipose tissue depots are already replete, which can lead to ectopic fat storage within internal organs, arteries, and muscle.25 In other words, Leptin is trying to keep you from over-eating.

The postprandial rise in circulating insulin levels induces an increase in leptin in a dose-dependent fashion. This effect is enhanced by high cortisol levels.26 However, although most obese individuals have high leptin levels, these common forms of obesity are associated with acquired impairment in the response to elevated leptin levels, which therefore do not induce the expected reduction in feeding and body weight that would mitigate obesity.

Furthermore, although recombinant leptin can be used to treat the rare monogenic form of leptin deficiency and the generalized lipodystrophies, administering the hormone to obese individuals does not always induce weight loss as predicted, suggesting that they may be resistant to the effects of leptin.27

Such “leptin resistance” is thought to be an important component in the development of obesity and is somewhat analogous to “insulin resistance,” wherein elevated insulin levels are required to maintain blood glucose levels in the normal range.27,28 The chronic hyperleptinemia which characterizes obesity decreases the transport of leptin into the central nervous system (CNS) and/or impairs the signaling properties of leptin receptors such that acute leptin responses do not adequately signal “fullness” to the brain to curb hunger.

This confers increased susceptibility to diet-induced obesity, which in turn raises leptin levels further and worsens leptin resistance, leading to a vicious cycle of weight gain. Therefore in addition to being a major cause of obesity, leptin resistance is also an important consequence.28-30

Leptin controls feeding not just by providing a physiological satiety signal, but also by modulating the perception of reward associated with feeding.30 This action of leptin probably occurs at the level of the mesolimbic dopaminergic system, and may explain the weight gain commonly induced by antipsychotic drugs, which act as mixed dopamine receptor antagonists.31

Based on existing knowledge, obese individuals with more severe leptin resistance are likely to struggle more with dieting and weight loss through lifestyle interventions and may experience rebound of weight gain more quickly after weight loss; in addition, these individuals may exhibit more severe insulin resistance along with an increased number and severity of components of the metabolic syndrome (e.g., hyperglycemia, central adiposity, hypertension, hypertriglyceridemia, and reduced HDL-cholesterol).17

Outside of the Central Nervous System, leptin can directly affect glucose metabolism by enhancing insulin action in the skeletal muscle, liver, adipose tissue, and by improving function of the pancreatic β cells.36 Leptin suppresses insulin secretion from the pancreas, decreases the production of glucose in the liver, and increases glucose and fatty acid oxidation in both muscle and adipose tissue.36,37 Most of the effects of leptin are mediated on these tissues indirectly via leptin actions in the hypothalamus.

Consistent with this, epidemiologic data show a strong association between insulin resistance and the chronically increased leptin levels associated with leptin resistance (reviewed in 38). The hyperinsulinemia ensuing from insulin resistance plus loss of the protective effects of leptin action can augment the exhaustion and apoptosis of pancreatic β cells, eventually resulting in T2DM.39,40 Pancreatic β cells have leptin receptors and leptin may also be an important direct regulator of β-cell function at different levels including insulin gene expression, insulin secretion, cell growth, and apoptosis.36,38

A link exists between obesity and chronic inflammation, and it has been proposed that leptin regulates some aspects of the inflammatory response. Leptin production is acutely increased during infection and inflammation.43,44 Elevated leptin also affects the hypothalamic-pituitary-adrenal (HPA) axis and is associated with raised white blood cell counts, indicating a role in the physiological stress response.45,46

Factors that influence inflammatory markers in general can acutely affect leptin levels. In such situations leptin may no longer strictly correlate with body fat mass:43,44

The relationship between leptin and CVD is complex.58-60 Leptin is necessary for normal cardiac function, as it plays a critical role in preventing cardiac lipotoxicity (lipid accumulation) in obesity.61

Hyperleptinemia is present in patients with coronary heart disease, chronic heart failure, hypertension, stroke, and in those at increased risk of myocardial infarction (MI).42,58,59,63 Hyperleptinemia may play a direct role in the pathogenesis of CVD by inducting platelet activation, smooth muscle cell proliferation, endothelial dysfunction, and oxidative stress.64

Consistent with these pro-atherogenic effects, elevated plasma leptin concentrations are independently associated with carotid intimal-medial thickness (CIMT) and with coronary artery calcification score in patients with T2DM, even after controlling for adiposity.60

These pro-atherogenic effects of leptin have obvious negative implications for obese individuals exhibiting leptin resistance. Nevertheless, the complex association between leptin and cardiac function may be one factor underlying the so-called “obesity paradox”; i.e., the observation that survival from certain CVD-related endpoints may be paradoxically increased in individuals with increased BMI.”65

To date, several interventional studies have been performed to evaluate the effects and safety of leptin administration in lipoatrophic or obese patients with hypoleptinemia. Administering recombinant human leptin can reverse the obesity of leptin-deficient (but NOT leptin-resistant) individuals and corrects many of the associated metabolic abnormalities including diabetes, dyslipidemia, and hepatic steatosis.66-68

Clinical trials are ongoing to find a modified, more potent therapeutic with a longer half-life, to reduce the frequency of injections and accompanying skin inflammation.69-71 Leptin replacement to children with congenital leptin deficiency remarkably ameliorates hyperinsulinemia and hyperlipidemia.72 Recent randomized trials demonstrate that combination treatment with an amylin analog and human recombinant leptin significantly decreases not only body weight but also insulin levels in obese subjects.73

Importantly, individuals with evidence of more severe leptin resistance will likely require greater medical and social support measures to achieve and maintain substantial weight loss through lifestyle modifications such as diet and exercise. Hence, these individuals may benefit from more frequent and intensive interaction with medical providers, dieticians, and nutrition and exercise counselors to successfully lose weight and maintain weight loss.

In general, for obese individuals with elevated circulating leptin levels, weight loss may be one of the primary therapeutic targets. The following lifestyle recommendations and medications can be used to reduce insulin resistance and improve β-cell function, personalized to the individual patient’s clinical needs.

Medication choices may include: