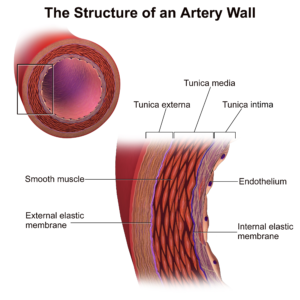 We know that hypertension is associated with an increased risk of cardiovascular disease.

We also know that hypertension is caused by a number of different mechanisms that result in elevated blood pressure. The blood vessel responds appropriately in an attempt to protect the fragile capillaries and prevent them from blowing out due to this increased pressure.

The very first thing that happens is endothelial dysfunction. You cannot have a vasculopathy without it.

Arterial remodeling occurs through inflammation, fibrosis, growth, and apoptosis which occur due to the hypertension.

Microvascular adaptive mechanisms are working to protect the fragile capillaries from excess pressure but necessarily reduce blood flow with a mismatch in local tissue demands and induce ischemia.10

The media gets very thick. It becomes hyper-responsive to catecholamines and cortisol so a little stimulation by these causes substantial vasoconstriction.

The wall of the artery gets thicker.

The process begins with the small resistance and pre-capillary arteries. These arteries are very small (less than 100 μm in size. These small arteries respond to the increased wall tensile stress (increased blood pressure) with eutrophic remodeling moving into the lumen without the artery itself getting larger externally.10

This inward growth constricts the lumen and reduces blood flow and may contribute to ischemia. At the same time, the muscle in the wall of the artery is getting bigger so when it constricts it really clamps down and can stop blood flow altogether. Now you have complete occlusion of the artery.

This is what is happening in the brain when there is “white matter disease.” These are micro-infarcts in the brain due to the intense myogenic response and eutrophic remodeling due to the underlying vasculopathy.

This process also occurs in the peripheral circulation but it is noticed less frequently. These patients will often complain of foot pain or tingling and they are told they have neuropathy. That is true. However, the underlying problem is the hypertension and vasculopathy causing vasoconstriction of the small arteries that supply the nerves. You then get small infarcts in the nerve resulting in neuropathy.

The larger arterioles (100-300 μm in size) have less myogenic constrictive response but they still undergo some of the same other changes. These tend to be affected later on, after the small arteries.

With all of these changes, the artery wall becomes thicker and stiffer. It can’t expand like it previously could and its compliance decreases.

Inward eutrophic remodeling the artery lumen, as well as the outer wall diameter are decreased. The media/lumen ratio is increased and the media cross-section remains the same. Basically, the artery wall gets thicker and grows inward into the lumen. This type of remodeling is more common in mild essential hypertension

Hypertrophic remodeling is where the media gets thicker and begins to move in to the lumen. This results in an increase in the media cross-sectional area and the media/lumen ratio. This form is more common in severe hypertension.

Apoptosis, programmed cell death, helps to counter cell proliferation and helps adjust developmental growth. Apoptosis can be both increased and decreased in hypertension based on different tissues (including blood vessels).

These mechanisms result in remodeling of arteries and arterioles. These mechanisms are initially adaptive and protective to prevent blow out as previously mentioned. However, when these processes continue they become maladaptive and contribute to many of the negative effects associated with hypertension.

Cilazapril, an ACE-Inhibitor (ACEi), can reverse the impairment of ACh-induced relaxation in spontaneously hypertensive rats.2

Simvastatin combined with losartan imrpoves endothelial function and reduces inflammatory markers to a greater extent than monotherapy with either drug in hypercholesterolemic, hypertensive patients.3

These studies support the hypothesis that AT1 receptor blockade has beneficial effects on superoxide production and nitric oxide bioavailability above that of other classes of antihypertensive agents. Reduced expression of components of the NAD(P)H oxidase may contribute to these effects.4

The change in small artery morphology caused by perindopril was not accompanied by any change in media cross-sectional area, suggesting that the change was due to “remodeling.”7 .

Although it is recognized that the cause of hypertension can be various, once blood pressure has become established structural changes emerge in the systemic vasculature. In medium- and large-sized vessels, as in the left ventricle, there is clear histological evidence of hypertrophy of the medial smooth muscle layers but, downstream in small arteries, which modulate vascular resistance, other changes occur. In essential hypertension, the smooth muscle cells of small vessels are restructured around a smaller lumen, but there is no evidence of hypertrophy or hyperplasia of the vascular wall. In secondary forms of hypertension, which tend to be representative of severer forms of the disease, hypertrophic remodelling is observed. Similarly, in non-insulin-dependent diabetes mellitus, irrespective of whether blood pressure accompanies this disorder or not, hypertrophy is also seen. The presence of architectural alterations in the vascular wall of small arteries may have a strong prognostic significance in patients, and this may be over and above all other known cardiovascular risk factors. Although it is yet to be established whether regression of such changes should be a goal of effective antihypertensive therapy, there is a body of evidence emerging indicating that different classes of antihypertensive drug have a varied effect on reversing vascular structure both in humans and animal models of genetic and experimental hypertension. However, at present, there are no data available concerning the prognostic impact of regressing vascular structural alterations in hypertension, and this must be an urgent research priority.8 .