Why Synthroid May Make You Feel Worse… 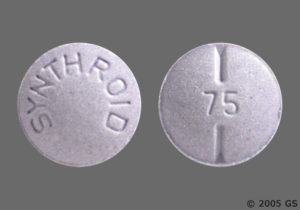 I often have patients come in to my clinic in Tulsa complaining of thyroid problems and they need a good thyroid doctor.

Sally started feeling bad a couple of years ago and went to her primary care doctor who checked labs. He checked a TSH and a couple of other baseline labs and tells Sally that everything looks good. Sally voiced her concern about how fatigued she was, that she can’t lose weight, and she just feel bad.

Her doctor considered medication to treat the symptoms of Sally’s thyroid problems but he does little to address the underlying concern.

Sally’s doctor didn’t initially prescribe this medication but said something far worse: “Well, you know you are getting a little older.”

Sally didn’t like what she heard and insisted that something was wrong with her thyroid. The next step is often an endocrinologist. This is a huge mistake!

Why? Because most thyroid problems are well within the realm of primary care and endocrinologists are often very dogmatic and militant about their approach to simply hypothyroidism. I’ll tell some of the stories I’ve heard from patients in another post. It is maddening!

Some doctors will actually check more labs than the basic TSH. Occasionally they will check a Free T4. If you get one that is being very comprehensive they may even check a Free T3. Regardless, it is not uncommon for patients like Sally to hear that their labs are all “normal” leaving them further frustrated.

Part of the problem is this definition of “normal.” If you don’t know how they get their normal reference ranges then you need to check out my Against The Grain Podcast on “Your Lab Results: Are They Normal?”

However, sometimes their labs may be just enough outside of the reference range that they are actually prescribed thyroid medication.

Finally! Sally started to feel like she is finally going to get better. There is finally some hope!

Sally was prescribed Synthroid – a T4 thyroid hormone chemical. It is also known as levoxyl, levothyroxin, and a few others. The endocrinologists mentioned above use this medication almost exclusively.

That is why most doctors will repeat thyroid labs in about a month.

So she went back to her doctor because she was feeling worse. The doctor repeated the labs only to see that the TSH was coming down and the T4 (if they check it at all) was going up so he reassured Sally that “everything is looking better.”

But how could that be?

The thyroid function is low and the patient is taking thyroid replacement. Heck, their TSH is even coming down! This must mean that the problem is in the patient’s head and not actually with the thyroid.

This is where many patients really start to get agitated, frustrated, angry, and depressed. I wonder how many prescriptions for Zoloft have been written because of this exact scenario…

I certainly can’t say what happens to all patients like this but some of them find me and come to my clinic. If you want to hear a testimonial from a patient then check out LaShana’s story.

How Synthroid may make you feel worse:

By the time the patient finds our clinic they are often extremely tired, frustrated, and fatigued. They thought they had a thyroid problem and were so excited to start a solution. Yet, they occasionally start feeling worse. Let me tell you, I often get an ear full! No worries, it is why we are here!

They will tell me their story while I listen with a bit of a smile. I’ve heard this story so many times that I can often finish it myself.

When they tell me that they started feeling worse when they started their thyroid medicine I have the pleasure of educating them about how thyroid hormones work and what is going on when you take T4 only medications. There is often a lightbulb that goes off once I explain why.

If you want a more detailed explanation of what follows read my post on The Mismanaged Thyroid here.

It starts with TSH

Thyroid Stimulating Hormone (TSH) is actually not a thyroid hormone at all. It is a hormone released from the anterior pituitary gland and its job is to stimulate the thyroid gland to produce thyroid hormones. The amount of T3 & T4 circulating in the blood is detected by the brain and tells the pituitary gland (via thyrotropin releasing hormone, or TRH) to make more if the levels are too low.

I was taught in Medical School that TSH is all I needed in order to appropriately evaluate thyroid function. That is true if everything is working correctly. The reality is that there are simply too many factors at play for this to be accurate. However, TSH is an important tool in comprehensively evaluating overall thyroid function.

Then the thyroid hormones

T4 is a ‘pro hormone’ meaning that it has to be converted to T3 in order for it to be the active hormone. The body does this through deiodinase enzymes which remove an iodine from the T4 molecule creating T3. The T3 then goes inside the cell, binds to the nucleus, and does what thyroid hormones are supposed to do.

At this point, some people will simply say “STOP!”

If the thyroid mainly makes T4 then why does taking T4 make some patients feel worse?

Good question, and I would argue that it is one most physicians can’t answer.

Remember I said that 90% of what the thyroid gland produces is T4? Do you also remember that T4 isn’t really active and must be converted to T3? Finally, do you remember that higher levels of T4 &/or T3 suppress TSH? Stay with me here…

Well, what is the other 10% that the thyroid gland makes?

Your thyroid gland does inherently produce some T3 but most of it is converted from T4.

So this is why things go wrong…

If you have a problem with T4 to T3 conversion (can happen for many reasons) then you very well may feel hypothyroid. Fortunately, there is a little backup with the 10% that the thyroid produces.

But when you take T4 only (Synthroid) you suppress that little bit of T3 production. It is similar to “water, water, everywhere but not a drop to drink.” You’ve got lots of thyroid hormone in the form of T4 but you can’t make the form you need tricking your system into thinking things are good when in reality the cells are starving for T3 thyroid hormone.

Fixing this situation is relatively simple in most cases. Simply stop the T4 only medication and add a combination T3/T4 therapy. There are several ways to get this:

But, of course, you have to consider why the system isn’t converting T4 to T3 as well. But that will be for another day.

If this post stuck a nerve with you or someone you know then give us a call, we’d be happy to help!