Iodine and the Thyroid 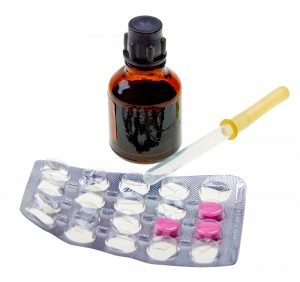 Thyroid hormones are the gas pedals for your metabolism.

These 2 hormones are basically composed of 2 tyrosine molecules (an amino acid) linked together and then iodine is attached to them. We can’t make these hormones without iodine.

T4, or thyroxine, has 4 iodine molecules. It is the primary hormone produced in the thyroid gland.

T3 (only has 3 iodine molecules attached), triiodothyronine, is the primary functional hormone inside the cell. It is what is responsible for most of the thyroid hormone effects.

T4 has to be deiodinated meaning that one iodine molecule has to be removed which makes T3. There are enzymes that perform this function and they are called deiodinases.

So, your thyroid gland is responsible for making these hormones. We get iodine (and iodide) from our diet as mentioned in the previous iodine post and iodine can be ingested as either iodine or iodide. Your thyroid gland tends to absorb iodide.

Iodine is an electroneutral substance meaning that it has an even number of electrons and protons so it has no charge. Iodide, on the other hand, has an extra electron making it a negative charge.

The next step in preparing iodine for incorporation into thyroid hormone is a process called oxidation. We have to prepare the iodide molecule to be utilized so it has to be oxidized. It has to convert from iodide to iodine. It does this by removing the extra electron. The thyroid gland does this through H2O2 (hydrogen peroxide) and an enzyme known as Thyroid Peroxidase (TPO). 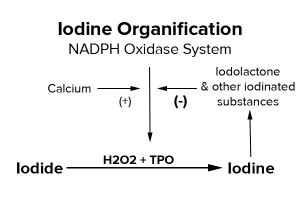 You’ll notice from the diagram above that when Iodine is produced, as well as δ-iodolactone and other iodinated substances, it decreases the activity of the NADPH Oxidase System. This is called product inhibition and is an important physiological control mechanism. The more iodine and iodinated substances we make the less we need so this makes sense.

However, when we have insufficient intake of iodide we cannot slow down the oxidation system because we don’t have enough iodine and iodinated substances. Are you following me so far?

Therefore, there is increased activity of H2O2 which leads to increased oxidative damage. At least some of this damage is on the thyroid peroxidase (TPO) enzyme itself. The damaged TPO is recognized by the body as foreign and potentially damaging and your body tries to fix it by developing antibodies against it. These are called Anti-thyroid peroxidase, or anti-TPO, antibodies. Elevated thyroid antibodies correspond with Hashimoto’s disease. These antibodies slowly destroy the thyroid gland.

The Importance of Antioxidants

I mentioned the oxidative damage that can damage TPO when left unchecked. Fortunately, we have a system to keep it in check. This system is called Glutathione Peroxidase and it is capable of protecting our bodies from the excess oxidative damage.

Get Your Iodine Level Checked

I agree that you CAN get too much iodine but the fact of the matter is that we just don’t see it. The RDA for iodine is 150 mcg per day. This level is based solely on the amount of iodine required in order to prevent the formation of goiter. This amount is appropriate if your only goal is to prevent goiter.

We want more for our patients. We want optimal health, ideal thyroid function and the lowest risk of cancer. You need more than the RDA in order to accomplish this goal.

How do you know if you are getting enough?

Get tested. We recommend a urine test to evaluate your levels. An Iodine Load Test seems to be the best way to accurately assess your iodine levels. . This is where you take 50mg of an iodine supplement and you collect your urine for 6 hours. We then determine how much iodine you eliminate and how much you absorb. If you absorb too much then you are considered Iodine deficient and we recommend replacement accordingly.