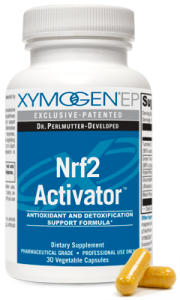 Nrf2 (NF-E2-Related Factor 2), a transcription factor in humans that is encoded by the NFE2L2 gene, regulates the expression of a set of antioxidant and detoxifying genes, protecting the body from the ravages of oxidative stress-related conditions, including (but not limited to) those affecting the brain and nervous system. In an unstressed state, Nrf2 is anchored in the cytoplasm by its specific inhibitor, Keap1 (Kelch-like ECH-Associated Protein 1). Keap1 functions as a sensor for oxidants and electrophilic xenobiotics. In the presence of any of these substances, Keap1 gives up its inhibition of Nrf2. This action stabilizes Nrf2, allowing it to accumulate in the nucleus and bind to the Antioxidant Response Element (ARE) located in the enhancers of its target genes. Under this circumstance, Nrf2 then up-regulates a variety of antioxidant enzymes and detoxifying proteins.*

A variety of natural substances have been shown to activate Nrf2:

Pterostilbene, a naturally occurring phenolic compound/analog of resveratrol that has comparatively better oral bioavailability, has been shown to possess cytotoxic, anti-inflammatory, and antioxidant properties. Resveratrol has also been shown to increase the protein and mRNA expression of Nrf2. There is evidence that Nrf2-mediated attenuation of oxidative stress and suppression of inflammatory response could be partially responsible for resveratrol’s potential chemopreventive effects. In rat and animal studies, resveratrol/pterostilbene have been shown to up-regulate a significant number of genes involved in mitochondria function, disruption of which is known to result in neurodegenerative disorders, and also to modulate cholinergic neurotransmission and improve cognition.*

Curcumin’s array of biological activities stems from its anti-inflammatory activity, antioxidant properties, and induction of phase 2 detoxifying enzymes such as Heme Oxygenase (HO-1). Purification of curcumin yields the curcuminoids, demethoxy curcumin (DMC) and bisdemethoxy curcumin (BDMC). DMC has been shown to induce HO-1 more effectively than curcumin. The ability of DMC and BDMC to induce the expression of HO-1 and to translocate Nrf2 to the nucleus of pancreatic beta cells in mice suggests that they may play a role in cellular defense. Human studies showed a significant increase in curcumin absorption when co-administered with Bioperine®, a patented black pepper extract.*

In summary, Nrf2 Activator is a promising approach for increasing antioxidant defenses by transcriptionally increasing the activity of the Nrf2/ARE pathway and activating transcription of anti-inflammatory and antioxidant genes. Green tea, curcumin, and resveratrol (pterostilbene) have also been shown to have anti-amyloidogenic properties that further increase the potential of this innovative formula.* 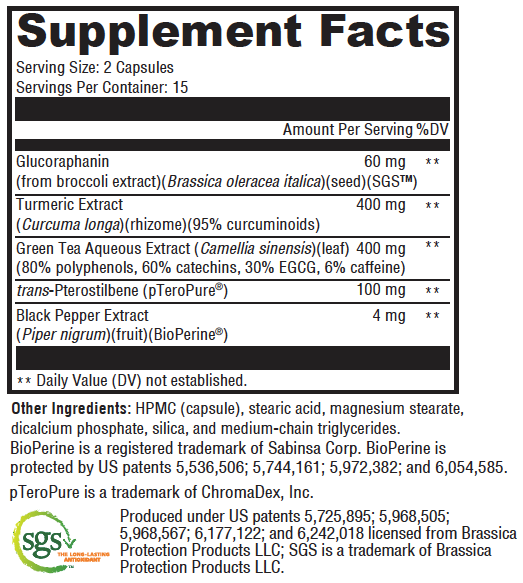 Take one to two capsules daily, or as directed by your healthcare practitioner.

Children, pregnant and lactating women, and individuals using blood thinners or receiving cancer treatment should consult their healthcare practitioner prior to use. Do not use if tamper seal is damaged.