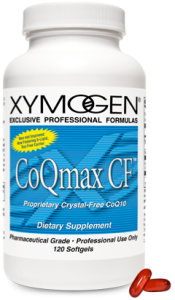 Coenzyme Q10 is a biologically active, natural vitamin-like substance belonging to a group of compounds called ubiquinones. Structurally similar to vitamin K, it is present in animal protein and can be synthesized in the body. However, a variety of factors, including aging, may cause CoQ10 depletion.

Despite its poor absorption (0.6-1.0%), pure crystalline (powdered) CoQ10 was the industry standard from the 1970s to the mid-1990s. A variety of forms and delivery systems offering somewhat improved absorption (2.3-5%) have entered the market since 1995; however, these forms have been unstable and crystallized, making them difficult for the body to absorb.

CoQ10 represents a new generation of CoQ10 supplements. Unlike many others in today’s marketplace, this generation is crystal-free when examined by a light microscope. This soy-free formulation contains five lipids to aid in dissolving CoQ10 crystals into single molecules, stabilizing the formula to prevent re-crystallization and facilitating passive diffusion to enhance absorption.* 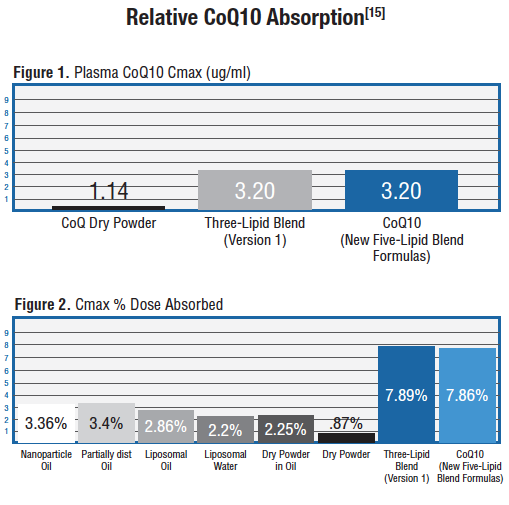 Absorption involves several phases in the movement of CoQ10 as it passes through a portion of the digestive tract, into the lymphatics, and into general circulation, where it becomes bioavailable. Absorption is determined by the time-based changes in the amount of CoQ10 that appear in the blood plasma after the ingestion of a single known dose. Bioavailability refers to the amount of CoQ10 accumulated in the blood plasma over an extended time after taking a known constant daily dose. 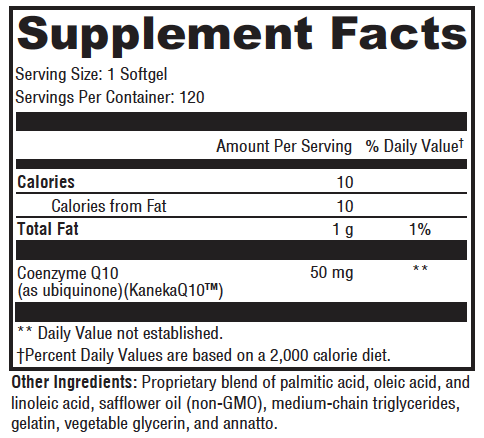 Take one softgel one to two times daily, or as directed by your healthcare practitioner. Optimal results may be achieved by consuming with meals that contain fat.

Children and pregnant or lactating women should consult their healthcare practitioner prior to use. Do not use if tamper seal is damaged.